At the automation show SPS IPC Drives (25-27 November 2014) in Nuremberg, Executive Vice President Roland Bent spoke on occasion of a press conference about the continuity in the company’s development, expressed by choosing sales chief Frank Stührenberg as the future Chief Executive Officer of the Phoenix Contact Group.

With Stührenberg, the long-time sales chief, Phoenix Contact will be led by a non-partner for the first time in the company’s 90-year history. Klaus Eisert, who has served as CEO for over 40 years, will be the chairman of the advisory board. This advisory board will be the link between salaried management and the family partners. As CEO, Frank Stührenberg will also remain in charge of Global Sales.

2014 is another successful year of growth for the company. Phoenix Contact is expecting between seven and eight percent growth in revenues worldwide by the end of the year. In absolute terms, growth will be about 120 million Euro; Phoenix Contact’s worldwide sales should total about 1.75 billion Euro. If we take into account our growth of over ten percent in local currencies, which is the best indicator of actual market performance, Phoenix Contact can report yet another year of significant growth at above-average levels for the market.

What is especially pleasing is that this overall growth is spread out relatively evenly across the globe. With eight-percent growth in sales in Germany, we are far above average for the market. This growth was not the result of any specific individual effects. In the rest of Europe, we recorded ten-percent growth. In China, market performance was satisfactory, with nine-percent growth in the local currency. Here, the significant double-digit growth rates of the past can no longer be expected in the future. With over ten-percent growth in the local currency, the US is a growth engine once again, reinforcing its number-two position in Phoenix Contact’s country ranking. In Germany alone, some 250 people were hired.

By opening a new 10,000 square-meter manufacturing and engineering center in the US, we have set the stage for increased regional presence in this important growth market. The Regional Business Unit building houses development, product and solution management teams for the regional and global market as well as the accompanying production facilities. In total, the innovation center in the United States has 130 engineers who generate almost 30 percent of the local revenue in the US with approximately 120 production employees.

Phoenix Contact has fifty dedicated sales companies in all global industrial markets and major emerging markets. In the continent of Africa and large areas of Central and South America Phoenix Contact sees great potential for the future. Phoenix Contact’s activities in Africa are mainly restricted to the South African market at the present time. As part of the company’s strategy for the future, we are currently moving forward with our program for the development of new market activities in North and West Africa as well as in the southern sub-Saharan region. These future markets will be developed by established local companies in France, Dubai and South Africa. The relatively untapped markets in Brazil, Argentina and Chile and in Central and South America, where Phoenix Contact already has several sales offices and subsidiaries, will also be developed in the long term. As the first step, a new organization was founded in Colombia in 2014.

In 2014, Phoenix Contact once again invested around seven percent of its global revenues in R & D activities. In absolute terms, this is a total of around 100 million Euro.

Our deep-rooted culture of innovation was recognized when we received the ‘Top 100 – Top Innovator 2014’ award. This award ranks Phoenix Contact among the best of Germany’s top innovators. We were voted the best in the categories ‘Involvement of upper management in innovation projects,’ ‘Innovation strategy,’ ‘Innovative processes and Organization’ and ‘Innovation marketing.’

Consolidation of the company’s activities

our long-time subsidiary KW-Software will be renamed Phoenix Contact Software GmbH on 1 January 2015. All the software activities of the Phoenix Contact Group will be consolidated in this company. The former KW-Software team will be significantly reinforced by the software developers from Phoenix Contact Electronics. The company’s headquarters is in Lemgo at the Centrum Industrial IT (CIIT). Software is the basis of intelligent automation devices, it is at the heart of engineering processes and it is ultimately what will make the Internet of Things possible. This expertise is an integral part of Phoenix Contact’s development resources. 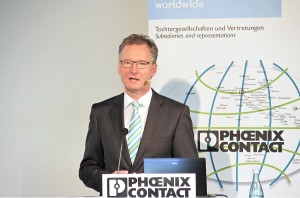 Another step toward strategic consolidation of the company’s activities and strengthening of the brand was made in the ‘device connection technology’ market segment. Coninvers GmbH was renamed Phoenix Contact Connectors Technology, without any change in legal status. In the company’ group Phoenix Contact Connectors Technology is the competence center for industrial round plug connectors.

The Industry 4.0 demonstrator will play a key role during the trade fair appearance of Phoenix Contact at sps ipc drives 2014. This machine illustrates how some aspects of the Industry 4.0 future project can be implemented based on the example of automated control cabinet construction. Owing to the integrated digitization of the engineering process, terminal rails can be individually populated with terminal blocks. Since Industry 4.0 is an evolutionary process, the demonstrator underlines that development takes place gradually.