Phoenix Contact’s DIN rail-mountable Inline controllers (ILCs) have at least one Ethernet interface to provide an economical solution in both areas. These controllers are programmed in accordance with IEC 61131-3 using the PC Worx automation software, which is supported by the comprehensive Building Automation Control Library (BACL) for programming the most important functions.

The use of controllers based on modern Web technologies allows users to design flexible building automation solutions for displaying and handling process data. Phoenix Contact’s Web visualization concept has three components: the Web server, which is an integral feature in all Inline controllers; the graphical editor, which makes it easy to create visualization pages; and the browser, which displays the visualization.

It does not matter which type of browser is used as long as a Java VM (virtual machine) is installed on the computer. A special browser requiring minimal hardware configuration is available for displaying visualizations on smaller systems, such as touch panels or low-end PCs (Figure 2). 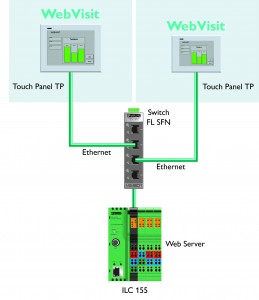