Phoenix Contact’s Ethernet-based controller solutions make it possible to integrate a number of standard Ethernet services into the controller firmware. The most familiar service is the Hypertext Transfer Protocol (http).

Technologically speaking, the Inline controllers consist of a controller kernel, which executes the necessary calculations for the application, reads input data, and controls outputs; and the Web server, which acts as a parallel kernel and operates independently of the controller kernel.

The Web pages and images to be visualized are located on an internal file system, which is 4 MB in size, even in the smallest Inline controller (Figure 3). The Web server provides the client with the requested visualizations, images, or lists from the file system, while the required process data comes directly from the controller kernel.

Figure 3: Structure of the data exchange between the Web server and the controller kernel.

The various browsers are not compatible, which means that the visualization pages are rendered inconsistently. For example, in some browsers, adjacent control panels overlap. This is not acceptable for a visualization solution that should work with every browser and always have the same look and feel.

Phoenix Contact’s Web-based solution therefore does not translate the visualization directly into http tags, but instead starts an executable Java applet on the client. If the Java VM is installed on the computer, then the applet is displayed identically in each browser. 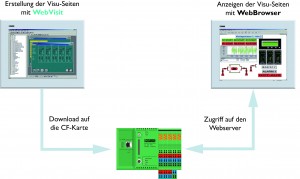 Phoenix Contact provides the WebVisit project planning tool so that users do not have to do Java programming (Figure 4). Any type of visualization can be implemented using various basic objects such as labels, edit fields, circles, squares, buttons, GIF images, bar graphs, or polygons.

Any object can be parameterized so that certain properties are influenced by the application variable values. Furthermore, the application can adopt the object content and states as data, so that the visualization interacts completely with the controller application.