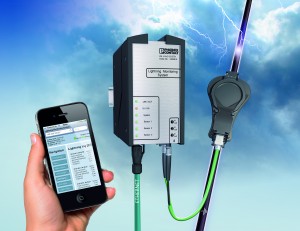 Industrial systems are frequently subject to high loads due to lightning strikes, which can cause both direct and secondary damage. The LM-S lightning monitoring system detects and analyzes lightning surge currents, providing a way to evaluate the actual system load.

All industrial sectors are striving to maintain the availability of their systems and avoid costly unplanned downtimes. Lightning strikes are a frequent cause of system failures. Electrical and electronic components should be effectively safeguarded using surge protection.

However, both the external structures and the lightning protection devices are still vulnerable to the high energy produced by lightning strikes. In addition to damage directly affecting system operation, other lightning damage may manifest itself only during continued operation. Such damage can be avoided by detecting and correcting the cause of the problem or by dealing with the consequences in a timely manner. In order to evaluate the current status of operational systems, it is necessary to collect information about the actual load caused by lightning strikes. Having access to detailed information allows the system status to be analyzed more precisely and maintenance to be targeted in a more cost-effective manner.

Number of Lightning Events not Decisive

Two methods are commonly used to analyze lightning strikes. One uses event counters to perform quantitative analysis. The counting units are mounted directly on the lightning arresters and record the number of strikes based on the magnetic field induced by the lightning surge current. A reading of the number of recorded strikes can be performed on site. Qualitative analysis for this device class is typically limited to the information provided for the counter’s response range.

The second current measurement method uses a magnetic card and a separate analysis unit. The card, which is mounted on the lightning arrester, has a magnetic strip that is perturbed by the electromagnetic effect produced by lightning surge currents. The strongest perturbation can be analyzed using a card reader. This can be performed on site, or the cards can be collected and analyzed in the laboratory. This method does not provide information about the number of lightning events.

The Phoenix Contact LM-S polarimetric lightning measurement system detects each lightning strike passing through an arrester and analyzes it using typical lightning surge current parameters. The measuring system is based on the Faraday effect. This system works using a linearly polarized light signal passed through a dielectric. If the dielectric is permeated by an external magnetic field, the plane of polarization of the light signal rotates as a function of the strength of the magnetic field (Figure 1). 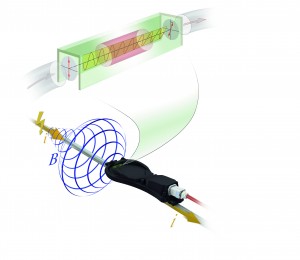 The measuring system uses the Faraday effect. The plane of polarization of the linearly polarized light signal rotates as a function of the surrounding magnetic field.

The electro-optical converters in the analysis unit emit light signals required for the measurement and convert them back into electric signals after they pass through the sensor. A processor with a data buffer continuously analyzes the signals. When a lightning event occurs, the characteristic parameters for the surge current are calculated from these values (Figure 2). 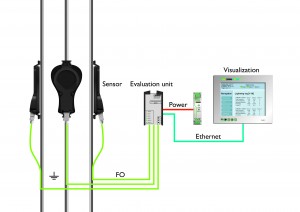 The sensors are connected to the analysis unit via optical cables, and are also connected to a 24 V power supply and to the network.

The lightning surge current amplitude, maximum current slope, charge, and specific energy of the lightning strike are then stored in the analysis unit along with the date and time of the lightning event. The data can be accessed via an Ethernet interface. The LM-S can thus be integrated into the existing infrastructure.

The integrated Web interface can be used to access the stored lightning surge current data and to make calibrations and adjustments for the local conditions. The magnetic field characteristics are a function of both the measured current strength and the profile of the lightning arrester. In order to calculate the parameters precisely, the analysis unit’s Web interface provides a selection of profiles (Figure 3). Up to 500 data records can be stored in the analysis unit memory. This data can be transmitted to external computers using the export function. The data can be used for statistical analysis and archiving. 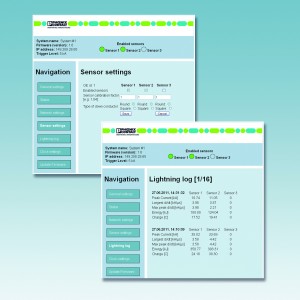 System-specific settings can be configured and lightning parameters can be queried via the Web interface.

A Comprehensive View of the Lightning Surge Current

Monitoring lightning surge current loads on industrial systems was previously limited mainly to counting the number of surge currents and possibly their maximum amplitude. The dynamic current characteristics were thus not monitored. However, the charge and rise time of the lightning surge current are important indicators of potential damage. The expected damage caused by a long-duration lightning strike of low amplitude can be as great as the damage caused by a strike with many times the amplitude but a considerably shorter duration. Frequent lightning strikes with lower amplitude also create a high load for mechanical structures. To take this into account, it is also necessary to monitor the cumulative charge.

The LM-S lightning measurement system provides lightning surge current analysis with a more precise evaluation of the system status, thus taking the dynamic parameters associated with the surge current into consideration. This information is useful for determining if and when, and what kind of maintenance is required. If serious damage has occurred, the system can be shut down in a controlled manner in order to prevent secondary damage. It is not necessary to perform visual system inspection or take readings of the measured values on site. Travel and inspection costs are thus reduced and the causes of secondary damage can be detected and remedied early.

The LM-S measuring system analyzes lightning surge current characteristics with high accuracy and provides detailed information. This information can be used to evaluate industrial system loads more extensively than just using the number of lightning strikes and the maximum surge current amplitude. Additional parameters such as surge current slope, charge, and specific energy allow inferences to be made as to the actual operational system load. The system thus helps ensure that industrial facilities operate economically and with high availability across different sectors. 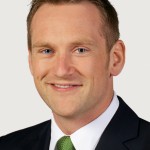