When Michael Jackson passed away in June 25 2009 last year, one of the surprising things was the fact that it was not the mainstream news like the Washington Post or the NY Times who reported it first; but rather it was a celebrity gossip website, TMZ who published the news first.

The news was quickly adopted by Twitter users who then retweeted the news on to the world. From this, we can see the speed at which news can quickly travel across the world in mere minutes.

What is it about Social Media that attracts us? The most important reason I feel is because it has no boundaries. Unlike traditional media like newspapers, which are confined to within the distribution network, Social Media websites like Twitter and Facebook reaches out to a global audience.

It used to be a habit of mine to buy a copy of The Straits Times in the morning to read while commuting to work on the MRT. However, in recent years I have found myself relying on print media less and less.

Apart from spending money on the newspaper, I would also risk the ire of the morning crowd who would shoot me dirty stares whenever I try to flip the pages on the train.

However, by following The Straits Times official Twitter feed (@stcom), I am able to read the latest news in the most non intrusive way possible by using my phone. 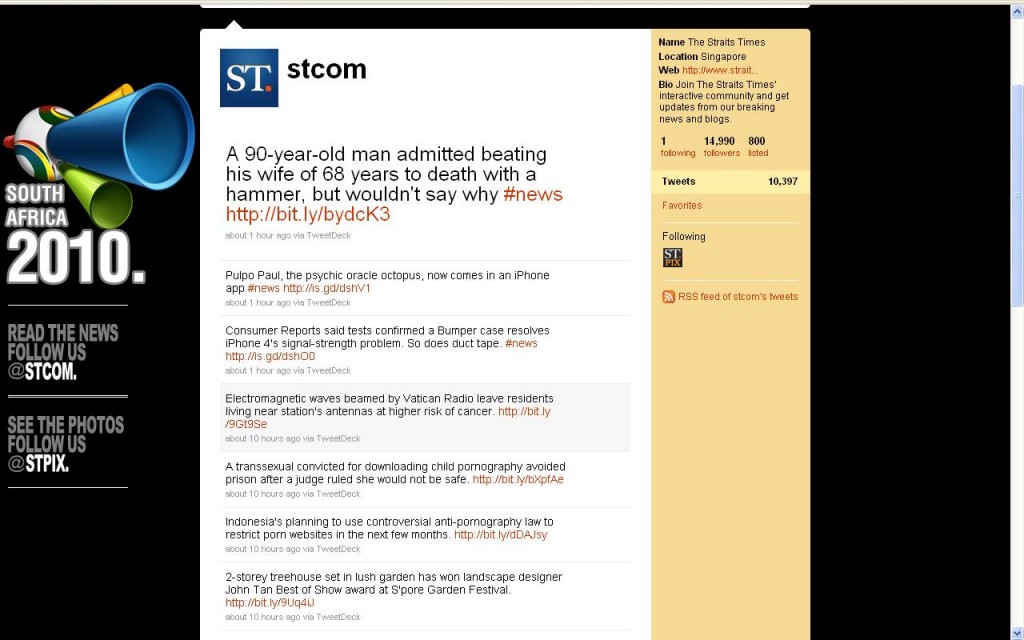 As you can see from the picture, the news are updated on a constant basis throughout the day by The Straits Times, and the best part about it all is I can choose what I want to read.

If a news headline appeals to me, I just simply click the link and I will be taken to the article on their webpage.

In the past, connecting with celebrities seemed so distant – the only feasible method of getting a chance to talk to them was either attending their live appearances, sending them a fanmail (which are probably and screened by their manager) or sending them an email – not even their personal email mind you, its a generic email of the celebrity’s recording label.

Yet once again, with the emergence of Twitter connecting with your favorite celebrity is as simple as ‘following’ them. For example, I am a huge fan of Neil Patrick Harris. I can simply just follow him on Twitter to get all the latest news about him. Tweets that he posts includes mundane stuff like where is he having dinner at, what is he reading to more personal stuff like photos of him with his friends.

This article is part 1 of 3 of how Social Media has changed our lives. Stay tuned for the next article next week where I will discuss about probably everyone’s favorite social networking site – Facebook.