Reliability is the keyword in Process Engineering. Its electrical system, the quality of the electrical contact points, is a major consideration for the reliability of the overall system. And how do you define reliability in a system? Is it in the Programmable Logic Controller (PLC), the drives’ system, or the Distributed Control System (DCS)?

In fact, the reliability of a system lies in the points where wires meet, or commonly referred to as connectors. In industrial application, it is widely known as terminal block.

Environmental factors have a major influence on the electrical system, in particular heat, cold and aggressive media. Flammable materials are often present or even processed in process plants, therefore, safety is paramount. This applies not only to the petrochemical industry, but also to the mining and food industry. Considerable risk potential is present as a result of explosive dusts.

Since July 2003, the ATEX 100a directive has been applied to equipment and protective systems in potentially explosive environments. To ensure sufficient explosion protection, it specifies increased requirements for electrical components and equipment. The constructional basis, in addition to the relevant regulations for modular terminal blocks, consists of special standards such as IEC 60079 (EN 60079) for equipment used in potentially explosive environments.

The National Electric Code (NEC) and the Canadian Electrical Code (CEC) are used as the standards for North America. The directive 94/9/EC (ATEX 100a) has been of particular importance to manufacturers of equipment and protection systems in CENEL-EC countries of the European Community and beyond since 1 Jul 2003.

Increased safety Ex E allows use as protection type in zone 2 and above all in zone 1, the actual potentially explosive area. However, this is only on the condition that the terminal blocks are accommodated in connection boxes that are also approved for Ex e – increased safety protection and have the equivalent of at least IP54 protection.

The key requirements for modular terminal blocks are:

These requirements and the technical data has to be checked by an independent testing centre (notified body e.g. KEMA, TUV etc) and certified with the certificate of design approval.

The following tests must be verified by the type examination:

No special approval is required for modular terminal blocks in applications with the protection type Ex i “intrinsic safety”. An increase for air and creepage distances requirement is required, 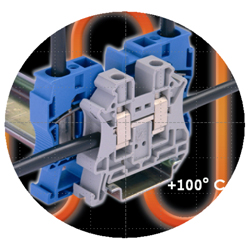 As mentioned earlier, rapid changes in temperature frequently occur near process-related sources of heat and cold in process engineering.

This test verifies the consistently high contact quality of the terminal points even with rapid temperature changes.
For testing purposes, modular terminal blocks can be mounted on the fixing support and wired to a conductor of the rated cross section.

The structure is subjected to rapid temperature changes using a two-chamber method.

The temperatures are maintained close to the upper and lower limits of the modular terminal blocks. This is generally a temperature ranges of -55 degree C to +100 degree C. 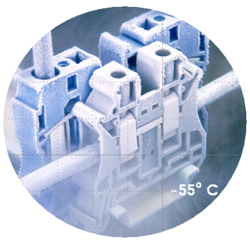 The dwell time in each climatic chamber is 45 minutes, whereby the changes take place within a few seconds. This change takes place over 100 cycles.

The requirements are fulfilled if, after the test, the individual parts are undamaged and their further usage is guaranteed. After the modular terminal block has cooled down to room temperature, it must go through a voltage drop test. 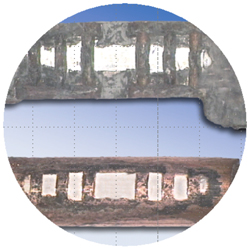 When two litres of distilled water and one litre of sulphur dioxide (SO2) gas are introduced to the test chamber, sulphurous acid forms at a testing temperature of 40 degree C for the duration of the test.

If, after reading some of the tests described, you feel that you had underestimated the complexity of a simple terminal block, then you are not alone. Sadly, many engineers, professional ones included, are still ignorant about it. What is seen as the least important component in a system such as terminal block, can and will turn out to be your worst nightmare. This can range from simple system failures to the scope of endangerment to human life.

What does that translate into for a business? Production delays and downtime. From an economic perspective, it means a loss in investment. As the saying goes: “Penny-wise, Pound-foolish”.