Exemplary model of the future Smart Grid – Automation in Electricity

The “smart grid” is a rapidly growing set of technologies, processes, devices and applications that affect and enhance the traditional electric grid.

These advances are partially driven by exponentially growing demands worldwide for energy as expressed in a commonly repeated statistic that “global electricity demand is expected to increase 75% by 2030.”

What’s happening with the smart grid also reflects developments made in communications, from Internet to cellular to wireless, as well as higher expectations from consumers regarding energy availability, rising energy costs and access to their energy information.

A smarter grid will also help integrate renewable energy including wind and solar into the energy mix.

To understand the smart grid, you first need to get familiar with the 125-year-old electric grid. Most people don’t think about where the electricity they’re using comes from or how it gets to their homes and offices.

The electric grid consists of several main touchpoints in an overall system that gets electricity from creation to the end user:

The main touchpoints for electricity include:

Smart grid technologies and innovations occur at — and can affect — any and all steps of the electricity ecosystem. Some are more focused on the utility side while others address the customer.

In the “old days” up until the last 10 to 15 years, utility workers — meter readers — were deployed into neighborhoods to read and write down data retrieved from energy meters in people’s back yards.

The first major change to this process came in the form of Automatic Meter Reading (AMR), through which meters communicate via a one-way signal to a truck that is driven through neighborhoods to collect data. 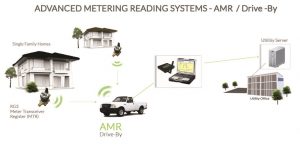 With advancement in technology, there’s the Advanced Metering Infrastructure (AMI) going beyond just reading meters and sending data to utilities — it also sends information back to the home and to the consumer.

With AMI, information can be transmitted to individual homeowners as well as utility offices for record purposes.

Smart meters aren’t effective without some kind of communications method to transmit data such as cellular, Wi-Fi or other wireless protocols.

Unlike cellular systems such as GSM and GDMA, Phoenix Contact’s wireless system isn’t optimized for tens of users but instead for tens of thousands of “users” that are in actuality devices, such as meters and sensors.

Our system is designed for extremely long-range and broad coverage so utility companies can deploy these communication networks more cheaply and reach more devices more effectively.

Other interesting developments in the Smart Grid would be the availability of web portals and dashboards that present aggregated power usage data in ways that are understood even by laypersons.

Such software and services, connecting to the Internet display real-time data about the power consumption via a short-range wireless system.

Information like these was never thought of before and it can assist in regulating power consumption in homes or in industrial plants, saving tons from electricity wastage.

Eventually, with systems like this along with “time-of-day pricing,” you will know exactly how much money you’re spending down to the minute, and you’ll be able to modify your behavior to use your appliances at different times.

Or better yet, you’ll benefit from an automated system that regulates usage for you based on your usage habits and peak usage times to run certain appliances at “cheaper” times of the day.

Smart grid adoption is happening across the globe. Examples are:

While the United States may be spending the most money on smart grid tech innovation and deployment, other countries making significant headway with implementation include Australia, New Zealand and parts of Europe, including Germany, Spain, the United Kingdom and France.

In Asia, while Japan and South Korea are already heavily invested in the smart grid, China is poised to become a major investor. Asia and Latin America are seen as emerging smart grid markets as they roll out smart meter programs in India and Brazil.

In future, for Smart Grid technology to further grow exponentially, the following implementations need to be considered:

Regardless of where the innovations are coming from, smart grid infrastructure serves utilities and consumers by leveraging information technology to bring advanced communications to a previously “dumb” network.

By putting a greater emphasis on information retrieval, aggregation, reporting and analysis, the potential to save on energy and modify energy consumption behavior can benefit everyone.

Feel free to contact us at marketing@phoenixcontact.com.sg to find out more!