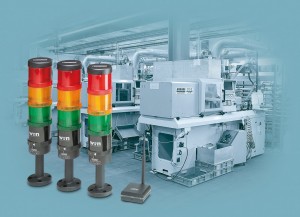 The radial expansion of networks with at least three slaves can be increased up to 900 meters, depending on the incremental conditions, using the routing function that is integrated in the slave. The slaves can be quickly installed without requiring tools thanks to the bayonet connection.

In addition to establishing a complete wireless system, the PSD-S MUX SET wireless multiplexer set can mirror the state of one signaling column wirelessly to another signaling column that is within optical range.